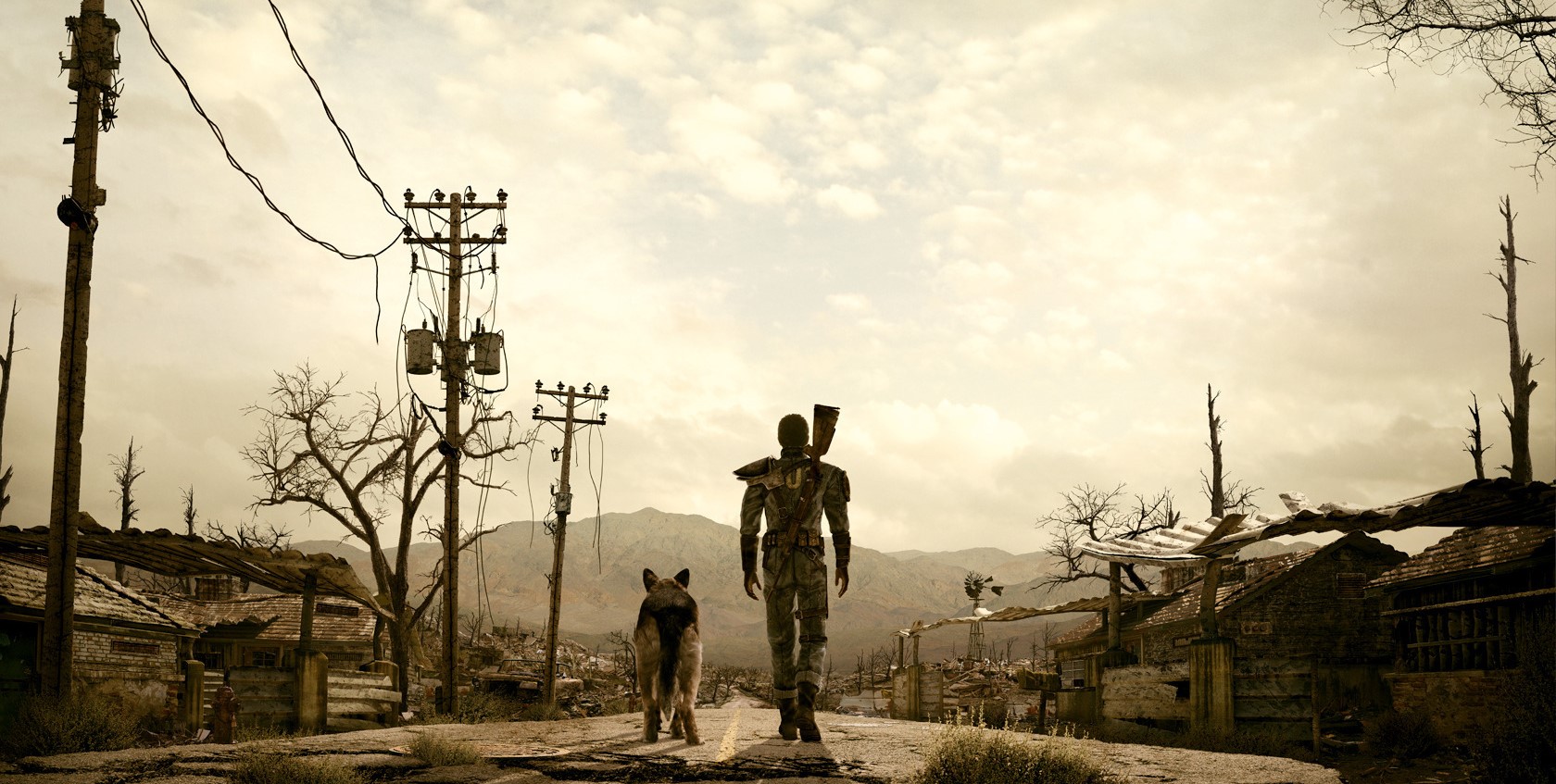 In my local RPG community, there was a curious saying – something we use to call “Fallout-level freedom”. In meant something very specific: the feeling of being lost in the world completely, with the absolute freedom to go anywhere and do anything.

But hey, someone may say, Fallout 3 and 4 have the same quality. Even better than that, unlike the old games, there’s no overworld map with specific points of interest, you have a fully rendered 3D world where you can “just pick a direction and go”. Isn’t that even better?

Well, not exactly. In the old Fallout games, there was no compass with markers. Modern Bethesda games work quite simply – you have a quest and a marker telling you where to go to progress it. Sometimes, if the road is complex, you will get halfway markers to guide you through this large immersing world so that you always know where to go for “progress”. Of course, you can just ignore the map and wander wherever for some time, you’ll probably find a cave or ruins to explore, a town to quest around in and other things to do while delaying your main quest progress.

This used to work very differently. I’ll use Fallout 1 as an example. The game starts in a pretty simple and natural manner: “Hello fellow Vault dweller, we’re screwed. The Water Chip is toast and we’re on the clock, running out of water. Someone needs to find a new one and you’re our best bet”. They give you some supplies, a gun, a knife, a couple of flares, some medicine and kick you on your way. Oh, and you do get a marker on the world map, telling you where another Vault is – maybe they can help you. Off you go.

But you don’t constantly get an arrow that tells you where to go, you – both the player and the character – just know where Vault 15 is. It’s a straight line there and you probably won’t screw around too much, since you don’t know anything about this world and you have a timer. It might seem like this constricts your freedom, but we’ll see.

On a straight line from Vault to Vault, you’ll discover a village, Shady Sands. If you talk with people there you can find a person from Vault 15 who will tell you that the Vault is deserted. Or you can go find that out for yourself – and find some vermin, some loot but explicitly no Water Chip. And that’s it, no additional info, no new quest marker or a diary entry with exposition. What do you do now?

Well, you can either throw your hand in the air and look up an FAQ, cursing the old PC RPG for being obnoxious, or you can start thinking in an RPG. You passed by Shady Sands and it’s the only other place you know, so let’s go there.

In Shady Sands, you find some quests, lore, and characters, but no Water Chip. You do however learn about another place, Junktown. Go to look for the chip there and while asking around for Water Chip you’ll hear that Water Merchants in the Hub are go-to people for water. That’s your best bet to find a Water Chip, for sure. At the Hub, Water Merchants will tell you that they for sure don’t have a Water Chip, but they can sell you water to extend your time limit. Just like they do to every major town, except for Necropolis, which gets water “somehow”. You pursue your only water-related lead to Necropolis, and that’s where you find the Water Chip.

This all might seem pretty reminiscent of Fallout 3 – go from point to point, learn new facts and leads to steady on your way to your father. But the devil is in the details.

In Fallout 3 you go through the prologue and get out of the Vault 101. Cool. The world opens in front of you with monumental music building up and blinding light dimming down to reveal the Capital Wasteland to you. And then a quest update shows up: Go Here. You follow the marker to Megaton, to the people you need to speak to. Then you get a new marker to Galaxy News radio station.

The road there is hard to find, so you’ll get a series of updating markers telling you when to dive underground and when to emerge. At Galaxy News, after a fetch-quest, you’ll get a new marker guiding you to Rivet, where you’ll easily find the person to talk to give you a marker for the Jefferson Memorial. Collect pointed out journals to get a quest update and a convenient marker for the Vault 112, then another marker and you get the point.

You have this large and open world around you, but there’s almost always a big arrow telling you where to go and whom to talk to, so you’re never lost – and never have to truly find your way. In my opinion, this is very detrimental to an RPG. You enter a world which is supposed to be immersive and life-like, but you never have to truly live in it. And I don’t mean mundane tasks, like maintaining your hunger and tiredness like a survival game. I mean solving issues in a manner that someone living in this world would have to. You don’t need to utilize the knowledge and skills of a person in this world to find your goal, God will give you a big arrow pointing at your goal.

Every step in Fallout 1 that I’ve mentioned requires you to look around, talk to people, investigate and explore. Most steps in Fallout 3 require you to press a trigger pointed out to you. In Bethesda Fallouts you explore when you want to take a break from the main quest, deliberately ignoring the direction or a person pointed out to you. But in the older games, exploration comes naturally. You need to look around and talk to NPCs because your character and you both don’t know where to go. In Fallout 3 you’re only lost when the compass arrow has problems navigating you through maze-like ruins. But that’s only because of how samey they are and because you’re looking for the arrow, not for the way.

The linear and guided nature of this quest line leads to some absurdly funny situations where you can’t do things out of order in Fallout 3. Come to Rivet at any point before getting the update from Galaxy News and your father won’t be anywhere near it. Come after that and you’ll “just miss” him. Of course, this kind of solves the “issue” of b-lining Necropolis right out of the gate in Fallout 1, but you can pull that off, you probably played the game enough, to the point where that isn’t really an issue.

What is an issue is the fact that we’re missing on one of the strongest tools of an RPG – the ability to get lost in the world. Maybe it’s to make games more mainstream-friendly and accessible, but at that point it doesn’t feel like a world anymore – more of a theme park. With attractions standing everywhere waiting for your attention to show off and a direct tour route that you can come on to continue your “adventure” when you feel like it.

One might say that this is to avoid being lost because everybody hates being lost. I would have to disagree. We hate getting lost in games where you’re not supposed to get lost. Where being lost is a sign of something going wrong. But as I’ve pointed out before, you’re never hopelessly lost in old Fallout games – there’s always a lead to be found. If you have absolutely no idea what to do, you can come back to Vault 13 and talk with the Overseer, figuring out together what to do – just like a real person would have.

And even if it so much harder to navigate thought he 1st/3rd person world of Fallout 3 than it is through the isometric world in Fallout 1, did you have to point out the Vaults? Places that are supposed to be hidden, hard to find, quest for which was half the game in Fallout 2 – they’re never more than a journal entry or a conversation away. With said journal or NPC being pointed out to you.

I swear I’ve never found Megaton for myself. The quest marker always popped up before I could see the city for myself.

Allow me this metaphor. Fallout 3 is a parent that brings you to a playground and tells you that “you can do anything you want”. It will still look over you, tell you “maybe you want to try that now?”, tell you which NPCs you can’t kill, etc.

Old Fallouts were the thrilling times your parents left town when you were young. For this time, you’re truly free, with nobody to tell you what to do – and nobody to help you as well. There are still things that you need to take care of – but you won’t be told how they must be done, nor will you get any help with them. You’ll just be told that the Water Chip gave up the ghost and you have 150 days to bring a new one.